Low debt is not enough to borrow more 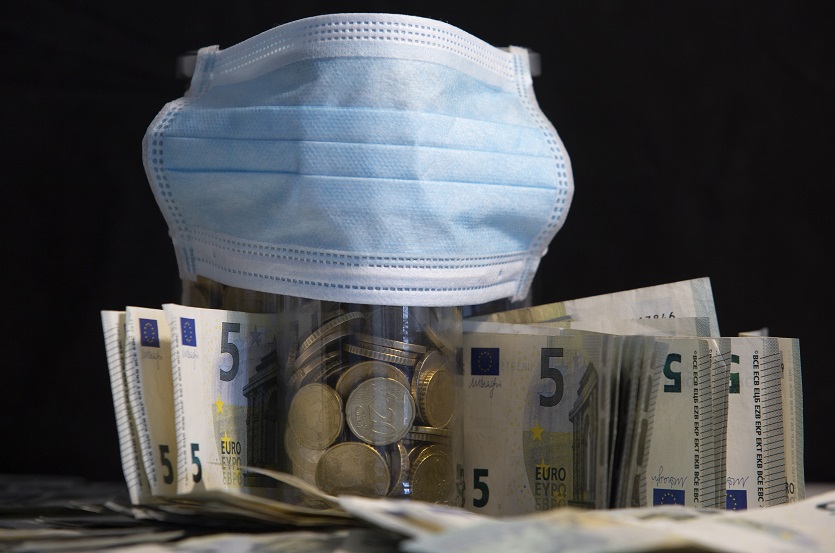 In the debate one may often hear this argument: “Latvia has low debt so the country can and should spend more to stimulate growth and create a more affluent country”. The argument should be that with low debt and currently very low interest rates, Latvia should borrow more in order to spend more in order to grow.

I am all for raising the prosperity of this country but I am unhappy when I hear the argument in italics above. In my perception this is a wrong way of arguing for a sustained, higher level of wealth, affluence and GDP per capita, call it what you want, and I shall try to argue why using some graphs, as I usually do.

If the argument were correct, we should have that (OK, I am stretching the argument a bit – but not too far) positive correlation between a country’s indebtedness (government sector only, of course) and its GDP per capita.

That just isn’t so. I have chosen what the IMF denotes “advanced economies” (i.e. most of the EU, USA, Australia, Switzerland etc.) with a few exceptions, see at bottom and I have chosen the year 2019 to avoid noise from the corona pandemic. See Figure 1.

Figure 1: Government debt as a share of GDP against GDP per capita, 2019. Latvia in red, Estonia in black and Lithuania in green 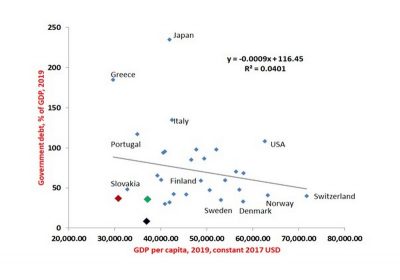 The correlation some might expect is just not there – and should there be an econometrician reading this, he/she would look at the R2 figure and conclude “no significant link” between the two variables.

As an example, Japan has stimulated its economy since its gigantic stock market and housing market crash in 1989 – but to no avail. The story in Italy is somewhat similar – an economy that hasn’t grown for 20 years.

In short, rising debt levels in Latvia (moving up, vertically) cannot guarantee higher levels of income per person (moving, horizontally, to the right).

Then some might argue that the Scandinavian countries have a much larger public sector in terms of government spending as a share of GDP than e.g. the Baltic ones. Such spending may have built the rich welfare states of the Nordics, the argument could go.

It is certainly true that public spending in Scandinavia (and the Nordics in general) is much larger than in the Baltics, see Figure 2 – but also here, a link between the state’s size in the economy and income per person is missing.

Figure 2: Government expenditure, % of GDP against GDP per capita, 2019. Latvia in RED, Estonia in BLACK and Lithuania in GREEN 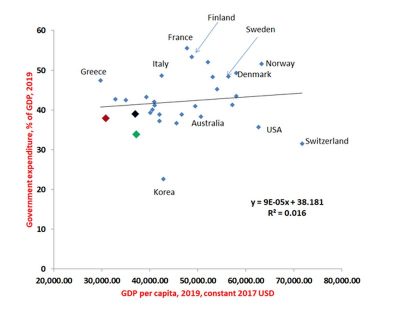 The state accounts for about the same share of GDP in Latvia as it does in Australia but Australia’s income per person is 2/3 larger than in Latvia. Comparisons with USA and Switzerland are even more extreme. On the other hand, Latvia has a smaller state than in Greece but is wealthier – and the country with the biggest state sector, France, is so-so in the middle of the income distribution.

Should Latvia have a larger welfare state, e.g. Scandinavian-type? That is a completely different question – but if so, then such a movement upwards is not God-given to translate into a rightwards movement in Figure 2. That will require ‘smart’ spending, whatever that is.

I think this dimension should also be part of the debate. Spending for spending’s sake and “just” raking up debt will not transform the country and should therefore be treated as too simple and superficial points of view.

In short, I wish for a somewhat deeper discussion of where Latvia should go. Just arguing for more spending and/or a bigger welfare state will not necessarily achieve the ultimate goal of a more affluent country.

Note –countries excluded are: Ireland and Luxembourg (inflated GDP figures), Hong Kong, Macao, San Marino, Singapore, Taiwan. Countries like Bulgaria, Croatia and Romania are not included in the IMF’s classification of advanced economies; I assume because they are not yet in the OECD.

Morten Hansen is Head of Economics Department at Stockholm School of Economics in Riga and Vice-Chairman of the Fiscal Discipline Council. 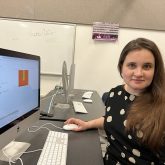 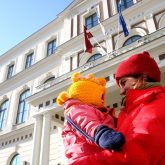 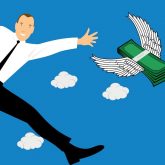 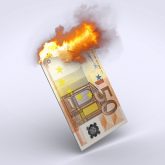