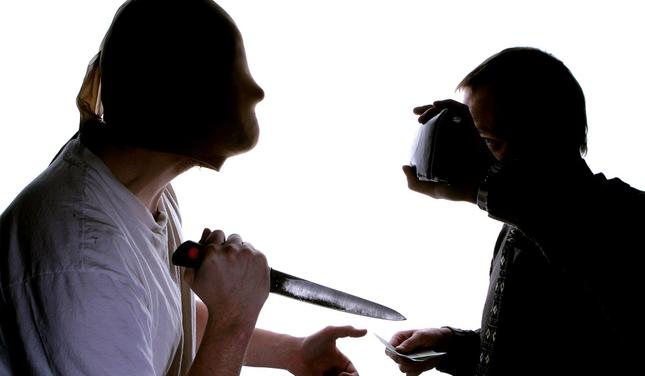 Latvia is a country where crime is rife because of police budget cuts, where people kill themselves, kill each other or just mow each other down on the street because of excessive drinking. And it is all caused by austerity, you know!

At least that is what readers of the Financial Times are told when they read this piece by professors Michael Hudson and Jeffrey Sommers, both from the USA. They should know because, as they write “Yet few of the enthusiastic commentators [favouring austerity/seeing austerity as successful in Latvia] have spent enough time in the country to understand what happened”, implying that they certainly know better.

Yet they don’t – looking at the data, the first place one should look, provides a rather different picture. Allow me to show that with some graphs and make some conclusions at the end.

“Crime is high”, they write. Eurostat provides data up until and including 2009, the year GDP really declined, unemployment rose and recession took hold. Here is data for the European Union, total crimes adjusted for size of population and – wait a minute! – Sweden is number one???

Figure 1: Number of recorded crimes per one million inhabitants, 2009 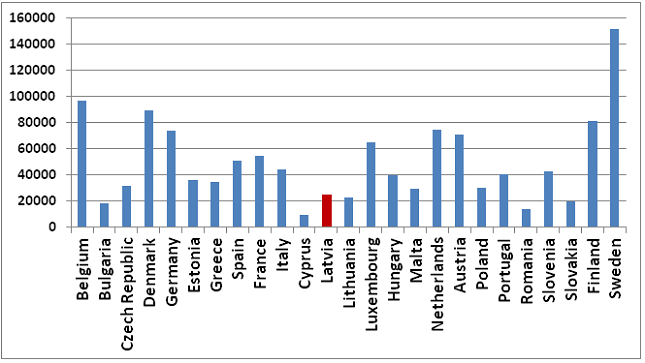 Note: Ireland missing due to lack of data for 2009 for number of crimes

Extremely efficient Swedish police officers or is throwing chewing gum paper also a crime in Sweden? But clearly representing different ways of reporting crimes and thus not useful for comparisons. Looking into the sub-categories (violent crime, burglaries etc.) do not, however, reveal Latvia as a country of high crime either – only one category does so let us show it here for the sake of the authors of the FT piece.

Figure 2: Number of homicides per one million inhabitants, 2009 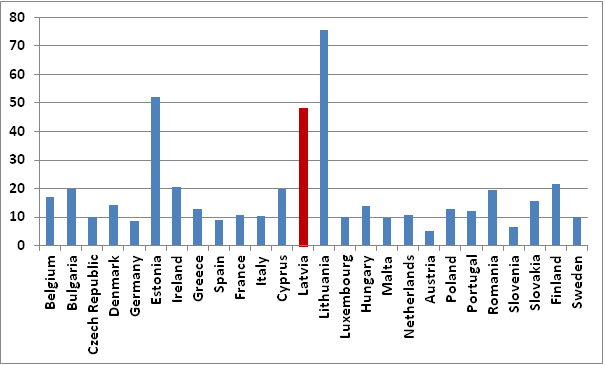 Note: UK missing due to data being split between England, Scotland, Wales and N Ireland

Unpleasant but actually, with 109 homicides in 2009, the 3rd lowest since independence (2010 and 2011 record even lower numbers) and a far cry from 1993 (a staggering 429). And, oh yes, a rate, though high, which is still below that of the USA. The numbers for individual crimes 1990 – 2011 are available for all to see and check at the Central Statistical Bureau’s web site here. In virtually all cases crime has NOT risen during the crisis and, interestingly, the biggest number of crimes (adjusted for population size) was recorded in that year of severe austerity – ehh – boom year, 2006.

“Police budget cuts”. Yes, the number of police officers has been cut as part of the austerity measures (again, data is available from Eurostat) but is Latvia ‘underpoliced’? I think not, cf. Figure 3.

Figure 3: Number of police officers per one million inhabitants, 2009 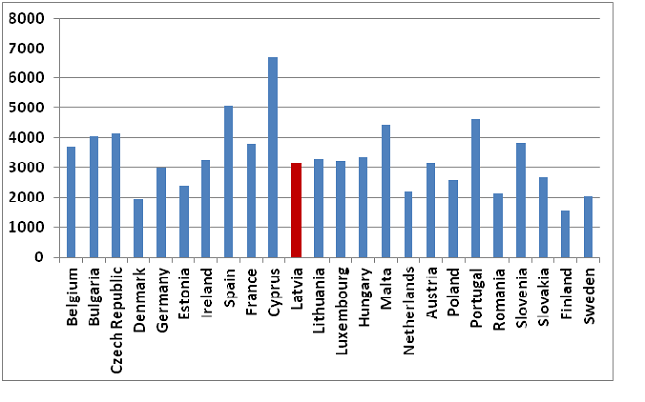 Note: Greece and Italy missing due to lack of 2009 data for number of police officers

Latvia is somewhere in the middle – perhaps there were too many police officers before and some pruning has reduced unnecessary public expenditure?

“It [Latvia] has among Europe’s highest rates of suicide”. True (see Figure 4) and very sad but not telling the whole story: a) Suicide rates were 50% higher in Latvia at the start of this millennium and b) high rates are very much a phenomenon of many ex-Soviet Republics – Latvia is far from alone. (See this link if you trust Wikipedia). Rates of suicide have risen from 2007 to 2009 in Latvia and I can easily see that related to austerity but rates did the same in e.g. Poland which did not have a recession, at least indicating that one should be careful when trying to link suicides and (lack of) economic well-being, however probable such a link may be.

Figure 4: Number of suicides per one million inhabitants, 2009

“It has among Europe’s highest rates of … road deaths caused by drink driving”. I am not a fan of the average Latvian driver and I don’t have data on this kind of death. But the Central Statistical Bureau (same link as before) provides a table for ‘violation of traffic regulations resulting in serious injuries’. Numbers here have almost halved since the recession started; whether they are still high by international standards I don’t know. But a more serious question is: What exactly is the supposed link between deaths caused by drunk-driving on the one hand and austerity on the other??? Beats me…

In all fairness, Hudson and Sommers also refer to declining birth rates (true), migration (true) and brain drain (also true) – but how can they make mistakes as demonstrated above? It ruins whatever credibility the rest of the piece might have.

It’s just prejudice, isn’t it?: Lots of crime, suicides, drunk drivers – hey, that’s what we should expect from a small backwards FSU country, right? Why even bother checking the data!

I thought Estonian President Ilves was over the top when he tweeted about Paul Krugman’s alleged patronizing of Estonia. I still think he was over the top but this here shows he has a point…

Hudson and Sommers blame ‘austerity fans’ for not having spent enough time here – perhaps they should try to be here a bit more themselves???

And in the meantime FT readers will know for a ‘fact’ that here we kill ourselves and each other, preferably under the influence.

P.S.: And by the way what about the content of their article? That’s really what I should be dealing with but this piece is too long already. Later…

Some comments here are a bit odd. So, a country experiences a significant drop in drunk driving… That’s a bad sign – underreporting. So, a rise would be a good sign? What would be a good sign? With regards the Hudson/Summers article – it is simply a disgrace. It is biased, it cherry-picks facts, it has no analysis to the extent that it is not worth writing anything – it is clear that authors are driven by faith and political agenda. Discussing something with them is like trying to convince a mormon preacher. Does it makes sense to even try? And it is a pity, but it simply characterizes the trend in prostitutization (hope there is such a word) of the profession in the US.

I think the profession in the US is high-jacked by a certain type of world view persons. We have to admit that in US medicine, law, management and engineering is way more competitive than economics.

Morten, thanks a lot, well done! You really show well that some of the assumptions in the discussions on the crisis in Latvia are not properly researched at all.

After the article in FT I will view Hudson and Sommers as petty and bitter liars. Not only they make misleading/wrong statements in the article, they lie also in comments to the article.

Sommers writes ‘…I never provided counsel to the head of Harmony Center, and always rejected their attempts to link us as “their” advisors. That said, an independent group, RTFL, had us produce an economic program, which was published by Harmony Center…’

Saskaņas Centrs website still contains letter written by Hudson and Sommers, saying “We are satisfied with our cooperation in making the “Latvia Renewed 2010 Report” with the Concord [Harmony] Center and look forward to continue engaging this economic policy production.” So much for the economic program for and independent group!

In 2010 Saskaņas Centrs proposed an alternative budget with 12% budget deficit. After Saskaņas Centrs got nowhere with the economic program written by Hudson and Sommers and the related budget, one could have understood their negative attitudes.

However, since then Latvia experienced 2 years of economic growth. The professors still cannot admit that they forecasts were wrong. Hudson and Sommers prefer to live in la la land, where ills of spending binge are cured by more spending.

Surely this is no surprise – Hudson & Sommers are frauds, pure and simple. They are writing that they advised the prime minister? Now come on – why would we get economic advice from historians?

The reason why Hudson and Sommers are advocating increased spending is the fact that they are from USA – its whole policy is to fix everything with more money. That is why they will try to neglect any positive effect of austerity and cuts in spending. If one such country flourishes – other american politicians might be asking similar approach for their own financial issues. But I doubt that could work for them for the USA is the etalon country of spending too much 🙂 Their debt is never to be paid.