Is inflation finally slowing down? 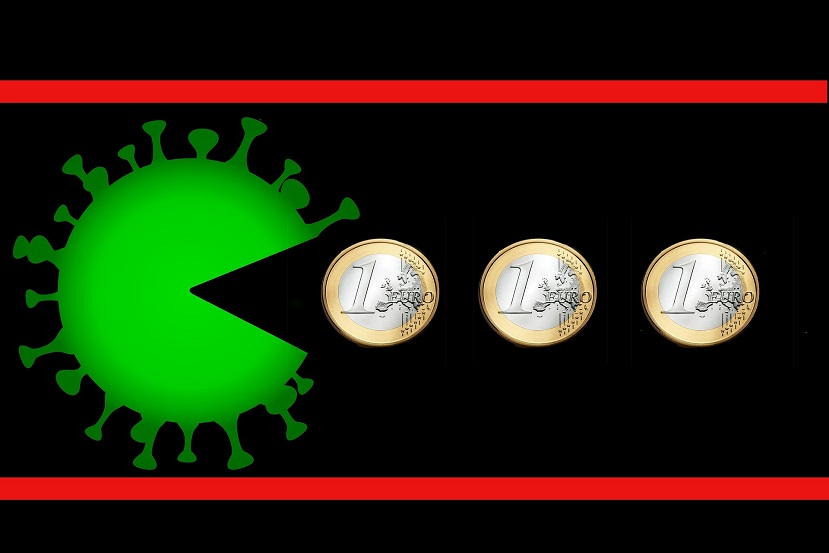 And there are quite a few signs that it will slow reasonably fast. We are entering a mild recession, which means less demand in the economy and thus less inflationary pressure.

But there are also strong signs from the cost side and that is what I will concentrate on here.

Let’s take a quick look at the history of high inflation for which I have put together Figure 1. The following lessons should be clear by now:

Inflation picked up earlier – around March 2021 – in the USA than in Latvia or the Euro Area where uncomfortably high rates started in July 2021.

The earlier pick-up in inflation in USA is most likely due to the massive fiscal stimulus there. It was big also in Europe but much bigger in the USA.

July 2021 was about seven months before the Russian invasion – high inflation was thus not a result of Russia’s invasion of Ukraine, but it has certainly exacerbated the inflation problem, notably via much higher energy prices.

The rise in inflation was a combination of excessive stimulus from governments and central banks following the corona pandemic – my take is that the pandemic in its early stages was expected to be much worse for the economy than it really turned out to be; thus, the economic support became too large compared to the problem is should solve, helping to push up inflation by creating too much demand.

And the rise in inflation came from a world economy that was eerily unprepared for coming out of the pandemic and for that I have made Figure 2 and Table 1. 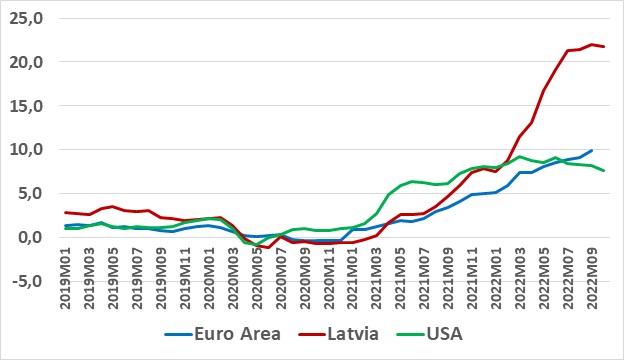 In 2021, as the pandemic abated (in Europe and USA; not in China), our economies started growing again, creating demand for all sorts of inputs to produce goods but also creating demand for transportation of such goods. The transportation sector was seemingly not prepared for this, see Figure 2, where the price of transporting a container rose a staggering 502% (!) from early 2019 (which I have chosen as base year, 2019 being pre-pandemic) to mid-July 2021 – after which it has fallen again by no less than 70% from its peak but still remains 83% higher than in early 2019. The same holds for all sorts of inputs. I have sampled an eclectic mix in Table 1 where I note the price in early 2019, the price and the time when the price peaked, its percentage rise from early 2019 to its peak and then its subsequent fall till today. The picture is very similar to the freight rate index and one can also see that several prices peaked just after Russia’s invasion (nickel, copper, aluminum).

The subsequent and in many cases very significant drops in the commodity prices should signal that, just like with the freight rates, the cost-push effect from these inputs is more or less over by now, implying no further push to costs and prices, rather the opposite.

I would really like to be daring and say that this could even lead to price decreases of some goods as their inputs are cheaper and the transportation of the final goods are cheaper than at the peak.

Let me be less daring and say that these developments should at least lead to reasonably rapid disinflation, i.e. inflation should come down fairly rapidly. In 2024, inflation should again be quite normal and it will drop during 2023.

But, as all the commodity prices listed are still significantly higher than in early 2019, we can not expect that prices in our supermarkets will return to what they were in 2019 – unless further commodity price declines should materialize. 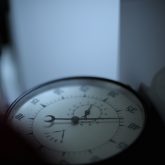 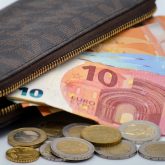