There is surprisingly much talk in Latvia of an imminent economic crisis.

Surprising, since it is not going to happen.

I will try to argue that almost all indicators in Latvia look favouarable right now and do not point to any crisis; I will even argue that a minor slowdown should be welcome.

Some background: The economy has been expanding for nine years in a row (35 quarters to be precise), since emerging from the recession after 2010, see Figure 1. 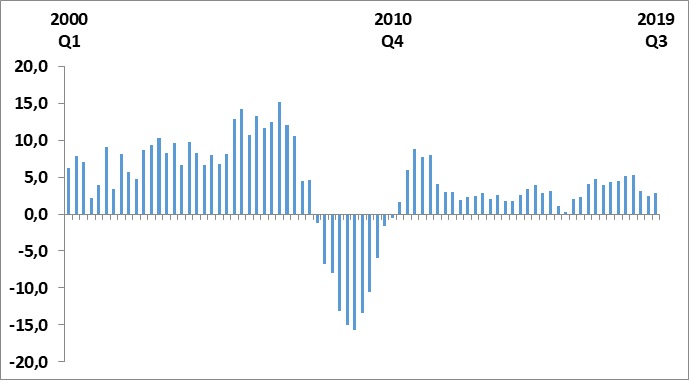 Contrary to the boom preceding the financial crisis, this period of growth has not been the result of a credit boom (many slides; e.g. p. 4). No credit boom = no ensuing credit bust, i.e. no repeat of 2008 possible right now. And with no credit boom there hasn’t been a real estate boom and thus no collapse of the real estate market can happen either. Another indicator of stability here is the current account balance – massive deficits preceding the financial crisis reflected tremendous borrowing from abroad; right now the current account balance is, well, balanced. 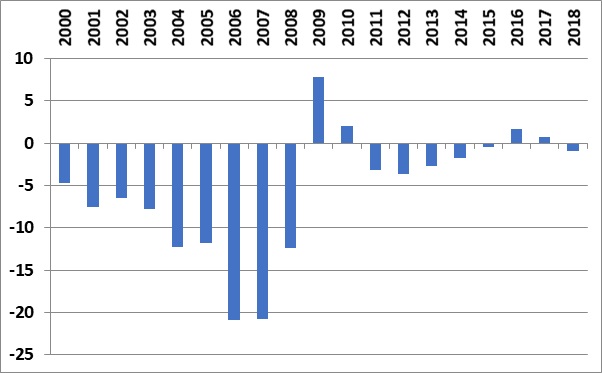 One similarity with pre-financial crisis times is an overheated labour market. That the latter is tight is not surprising, given nine years of economic growth coupled with outward migration and small cohorts entering the labour market. Here, a world slowdown and thus a negative impact on Latvian economic activity would actually be welcome since it would give the labour market some breathing space. The number of vacant jobs is rising fast and there is some danger of too rapidly rising wages and ensuing lost competitiveness of firms although nowhere near as serious as in 2007. 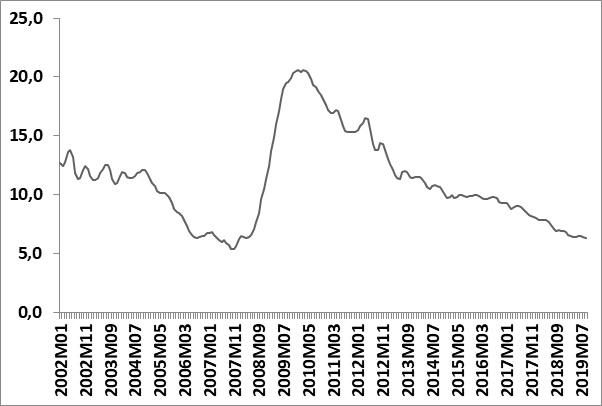 The fiscal situation also looks benign although fiscal policy, to my mind, should have been a tad tighter and produced a small surplus in the light of an overheated economy with above-normal tax revenues – as also envisaged by the Fiscal Discipline Law. Recent budgets have produced minor budget deficits and absolutely nothing – nothing! – points to phone calls to the IMF this time around.

Risks from abroad, then? Brexit, a US-China trade war, the piling up of corporate debt in many parts of the world, possibly overvalued stock markets, continuing central bank life support for underperforming Southern European economies… But I find these risks either to be rather minimal for Latvia (say, Brexit – the UK accounts for just some 5% of Latvian exports) or of having very low probability (the Eurozone would suffer dramatically should Italy default but it will not…) – in short, the Latvian economy is mostly affected by what happens in Latvia, which is, as argued, looking fine and by what happens in bigger trading partner countries such as Lithuania, Estonia, Sweden and Germany but no drama is unfolding there either.

But all is not perfect and one issue, home-grown, remains: MONEYVAL (The Committee of Experts on the Evaluation of Anti-money Laundering Measures and the Financing of Terrorism) and its upcoming report and evaluation (first half of 2020) of Latvia’s efforts to strengthen rules and regulations vis-à-vis money laundering and terror financing. Its latest report has no less than 40 recommendations for Latvia (p. 4-5) and while the Financial Intelligence Unit, as far as I can see, is burning the midnight oil to meet those recommendations I wonder, nevertheless, whether the evaluators will be satisfied. I mean, there have been many high-profile cases with respect to the non-resident banking sector but the evaluators might want to see prosecutions and not just implementation and strengthening of laws?

Should Latvia get a thumbs-down and be grey-listed (and join the ranks of e.g. Syria and Zimbabwe) by FATF (Financial Action Task Force) it would have negative consequences but it remains hard to see exactly how negative: Reputation risks? Definitely – Latvia would, once again, need to recover from a reputation of dodginess. Credit downgrade? Should be. Foreign investment avoiding Latvia? Most likely. Banks leaving due to risks to their reputation – I think not and really hope not. Just think of which banks might replace our existing retail banks – and where they might come from.

It will thus be wise to follow developments in Iceland, a country that was recently grey-listed.

Summing up, Latvia does not really have any short-term imbalances in its economy and thus nothing to push it into crisis – except a potential grey-listing which it is still in the hands of the country to avoid.

If avoided, expect a 2020 with a bit less growth but otherwise just humming along quite fine.

Latvia is both economically and geographically in the right location today; a much different position from 2008.

Morten Hansen is Head of Economics Department at Stockholm School of Economics in Riga and a Member of the Fiscal Discipline Council of Latvia. 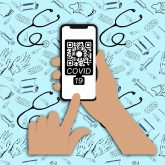 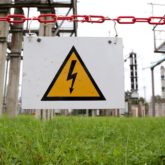 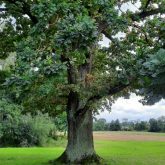