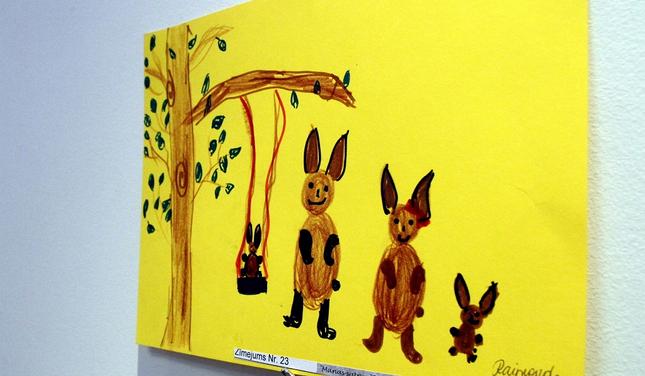 If one wants a flattering picture of growth in Latvia then a) go far back in time for comparison so as to lessen the impact of the 2008 – 2010 recession and b) use GDP per capita growth instead of GDP growth since the number of “capita” has been falling. Then one can have a picture like figure 1 below with Latvia being the second-fastest growing EU economy since 2000.

But it is not sheer manipulation – Latvia has, like Lithuania and Estonia, made a lot of structural and institutional development that makes this development well-deserved. But what about the next 10 – 15 – 20 years? Here a little decomposition of the growth experience might be helpful. 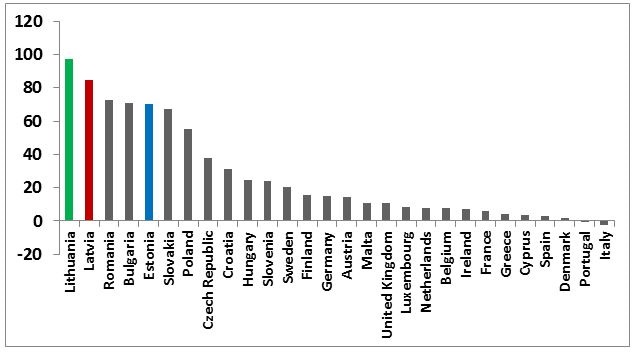 This decomposition answers the question of where the GDP per capita increase came from. A bit of arithmetic is needed:

The more math-savvy readers (if anyone is still reading this…) will see that the formula is a simple expansion of GDP per capita but it is smart in giving us four reasons for GDP per capita growth: Higher productivity, more employment, a bigger labour force and more persons in the group most likely to be at work (those of age 15 to 64).

Table 1: Cumulative growth of GDP per capita and its sub-components in Latvia

The boom saw productivity together with higher employment being important while, not surprisingly, most of the bust of 2007 – 2010 is explained by a massive drop in employment (i.e. in B).

The recovery is, roughly, shared 50-50 between productivity growth and employment growth.

But what about the future? Productivity growth should be the driving force, of course, since the country is in a catch-up phase with respect to European partners so A will undoubtedly grow. But B, C and D? The unemployment rate is already at quite low levels for this country so there is not much extra to squeeze out of B, the employment rate. It would be nice to see an even higher share of labour force among the 15 – 64 year old but as I have argued earlier this rate is not small by EU standards so there is not so much scope for growth of C either.

And it is of course the D-component we have to fear. Due to ageing, bad demographics and migration the D-component will shrink for many years to come – or put in a non-econ-jargon way – the share of pensioners in the total population will relentlessly increase for years and years to come.

Most are familiar with this upcoming demographic burden so perhaps there is not all that much new in this post but I nevertheless think that this decomposition is a useful way to illustrate the uphill struggle the Latvian economy faces in terms of managing economic convergence – to increase GDP per capita, the A-component must increase and will do so but at the same time decreases in the D-component will hold back GDP per capita convergence – another story of two steps forward, one step back.

And some more, simple but still important truths: Massive focus on whatever can increase productivity, increase the employment rate and increase the labour force is highly warranted.

What is troubling me in the economics, is the restless aiming into maximizing the real income per capita as sort of “holy grail” which will bring us into the endless joy and happiness… I doubt that strongly. Leave aside the extra poor countries struggling to feed its population, I believe we are wealthy enough to find the source of more happiness into much more profound ways and sources. (Unless, of course, we are not the followers of the sect “Maximum Income = Maximum Happiness”.) It’s sad that we do not have much contemplation around about such topics as re-distribution of the wealth of extra-wealthy and strongly-wealthy towards the extra-poor and towards the basic services available for all (education, medicine etc.), about lowering the consumption of avoidable luxuries (lowering the GDP/capita, by the way), about spending less time and energy on maximization of the output and wage income, and spending more of them on our children and family. I hope sincerely that the time will come also for Latvia to put more effort into considering “how-to”s for increasing the GNH/capita more than for the very-much-treasured GDP/capita.

The value of C in context of B and D looks counterintuitive for 2007-2010. In this period the employment rate went down (B=-14.4),which should discourage the workforce participation. Further, the rate of 15-65 yo went down (C=-1). This should decrease the labor pool unless there is a population growth, which isnt the case for Latvia. Now, how come that there is less working age population, less jobs available, however more people are willing and able to work. Did they work for under the table cash and after losing their jobs decided to sign up for unemployment benefits?