With me, they are. And perhaps they should change that sentence on their web site in the bottom right corner. Ouch! – after the Eurozone inflation rate in December 2021 beat its all time high, set in November 2021, that beat its all-time high set in October  2021, inflation in January 2022 set yet a new Eurozone record, at 5.1%, see Figure 1. The ECB’s medium term target of 2% seems very far away…

The ECB, however, still believes that inflation at the end of this year will be just 1.9%. Hmmm… They were not exactly right in terms of their expectations for Q4 2021 (same link), which were 2.3%.

In a recent post I criticized monetary policy of the ECB; here, I am happy to make a few more such arguments for why I think monetary policy is far too loose in the Eurozone. 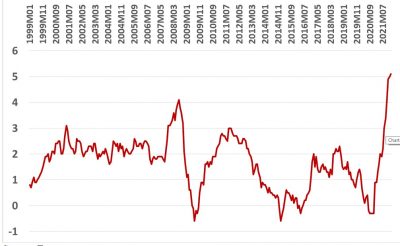 Start with the unemployment rate – it has actually reached its lowest level EVER since the Eurozone started operating in 1999, see Figure 2, getting to lower rates than were recorded during the credit boom preceding the financial crisis. Then, the ECB’s lending rate (marginal lending facility) was around 5%, today it is an ultra-loose 0.25%. And these days of ‘money for nothing” have lasted for more than 8 years if we, somewhat arbitrarily, set an interest rate of lower than 1% as “money for nothing”.

Note that the 2nd axis starts at 5% for better visibility 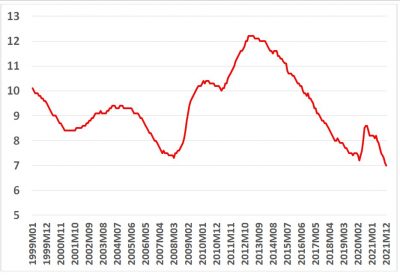 As always, the Eurozone unemployment rate masks substantial national differences, see Figure 3 – but with the exception of Spain and Greece, none of the unemployment rates are high by historical standards; several of them are actually ultra-low, which I will explore in Figure 4. 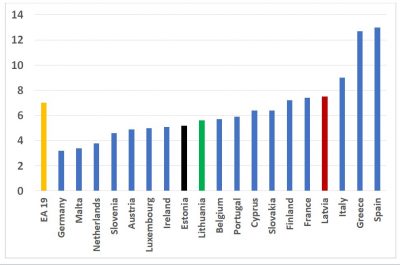 To demonstrate that unemployment rates are actually very low, historically, across most of the Eurozone, I have constructed Figure 4. I have looked through the data for the 19 countries and determined which month these countries saw their lowest unemployment rate since joining the euro (for Latvia that was 5.8% in October 2019) and then I compare it to the most recent recorded unemployment rate (of December 2021; here, the value for Latvia was 7.5% as can be seen from Figure 3). Figure 4 then portrays the difference between the December 2021 figure and the lowest ever recorded per country.

One can e.g. see that Germany in December 2021 was just 0.1 percentage point above its lowest ever rate of 3.1%, recorded in October 2019, incidentally the same time as Latvia saw its lowest rate.

Indeed, half of the Eurozone countries (OK, 9 of 19) today have an unemployment rate that is less than a percentage point above its lowest ever recorded value, a sign of very tight labour markets. In Spain and Greece, rates are still more than 4 points above their lowest values while I think they are not worried at all in Luxembourg over unemployment, at a paltry 5.0%, being above the all-time low of 1.8% in 2001.

In short, many Eurozone countries have very tight labour markets that do not need ultra-low ECB interest rates.

Figure 4: Difference between the unemployment rate in December 2021 and the lowest recorded for each country while member of the Euro area; percentage points 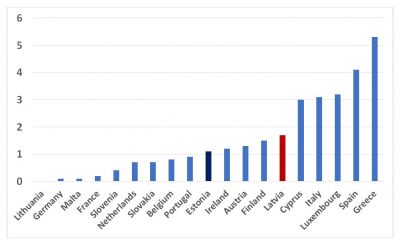 Source: Eurostat and own (cumbersome…) calculations

I can accentuate the point just made by looking at when countries recorded their lowest unemployment rates – this falls in four different time periods, see Table 1. For some, it was just after the formation of the Eurozone. For in particular many Southern countries, the lowest rates were a result of the credit boom preceding the financial crisis – credit booms that produced unsustainably low unemployment rates in e.g. Spain and Greece, which helps to explain why the gap in Figure 4 is not as dramatic as it first looks. 7.9% unemployment in Spain in May 2007 is a very rare phenomenon and was only possible due to the massive credit and real estate bubble (actually, much like the Latvian labour market in 2007).

Then a handful of countries, including Latvia, saw its lowest unemployment rate very recently, just before the corona virus struck, in 2019 (Latvia, as mentioned) or 2020. And then we have Lithuania in a class of its own – its unemployment rate in December 2021 was the lowest recorded while being in the Eurozone!

Table 1: Time of lowest recorded unemployment rate while a member of the Euro area

It will be interesting to watch the ECB’s next move in the light of yet another record-breaking inflation rate. Will they really not raise rates in 2022? As I started with, I think they are risking their credibility.

Allow me to finish in a way I have never done before, with a quotation from the Bible. The ECB responded to the corona pandemic with its gigantic Pandemic Emergency Purchase Programme (PEPP). It reminds me of this (and sorry if I am over the top…): “For they have sown the wind, and they shall reap the whirlwind!”

hi Morten, any comments about these stupid Canadians? You may choose the company that suits you best. Keep the graphs for Kariņs, he has scarce means to keep his footing not to dwindle. 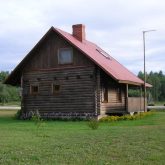