Two steps forward, one step back 22 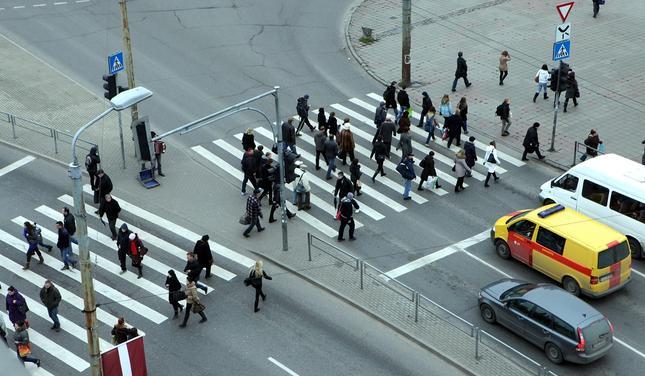 … is not a bad way to think of Latvian growth in the years to come. There will be more convergence with the EU28 average, Latvia will overtake structurally flawed countries like Greece but there will also be severe constraints to future growth; constraints that will be hard to ameliorate.

Start with another well-known picture: Latvia’s GDP development since 2005. The economy peaked in the first quarter of 2008 then contracted by 22.6% until the second quarter of 2010 – an ultra-deep but relatively short recession. The economy has since regained 16.9% of this loss but remains by the third quarter of 2013 still 9.5% below the peak.

Some commentators like to ridicule Latvia for still being below the peak of 2008 but I find it a rather strange benchmark for success or not. The situation in 2007 was hardly sustainable with a massive credit boom, a current account deficit or more than 20% and a sizzling, red-hot labour market, plus, what is not so often mentioned but is of crucial importance: A level of employment that Latvia can never reach again. I have written about it before but I think it can be repeated since it will act in years to come as a “one step back” example for Latvia’s economic growth.

At the end of 2007, see Figure 2, some 1,080,000 persons were employed – today even the labour force is much smaller than that number, partly because of migration and partly because of unfavourable demographics that were not created by the recession but rather by the transition process from the late 1980s when birth rates started to fall sharply.

Figure 3: Number of persons in 5-year age brackets in Latvia by 2013

This is troublesome but then look at differences in the size of age groups entering/leaving in about a decade’s time: About 150,000 50 – 54 year olds, less than 100,000 10 – 14 years olds. The labour force is about 1,000,000 today, measures like higher retirement age (very much needed) will ameliorate this a bit but there will still be a crunching effect – and it will slow the impact on GDP per capita and thus catch-up of the Latvia economy.

Catching-up in some ten years is often mentioned but it is just not going to happen and the labour market development is one of the reasons.

Thank you Morten! Very insightful. Calls for new approaches, new policies, new thinking. Commented a bit on it in my blog.

Negative demographic situation isn’t a phenomenon of the late 80’s only. Its an ongoing thing for the last 24 years or more. Emigration really peaked only in 2009 and 2010. A lot of the actions taken during economic crisis years made already bad situation worse.

You are right, of course – poor demographics started in the mid-1980s but never recovered; birth rates are still very low.

GDP per capita will not be very high if most of people are elderly pensioners. That was the whole point of the article.